This place was expectant…

A rock pile ceases to be a rock pile the moment a single man contemplates it, bearing within him the image of a cathedral.

Somedays when I sit and watch the city lights, and the cars rush by my window, I am drawn back to vivid memories of England. This is one of those nights.

Is there anything as transfixing as a the light in a cathedral? This fall I visited Bath Abbey Cathedral. As I entered, the hush and reverence of the place demanded my attention. As the light descended from the high rafters, it brought gentle beams and shadows to all it touched. Pews, memorial stones, and chipped old angels alike were illuminated by baptism from the noon sun pouring through the high ceilings.

Ah. I can see it in my mind so clearly.

What I learned on that trip is that most medieval towns are built in orientation to the phases of the sun throughout the year. The front and the back of a town face East and West, so that the streets run the course of the sun in her sky throughout the day and year. They did this to maximize warmth and light in the winter months and to track the seasons. In a world devoid of fluorescent lights and radiators, people shaped their lives around the sun and the seasons, counting on their light and warmth to bring them once again from winter to summer.

Cathedrals were built the same way, but with an added meaning. The front and altar of a cathedral always faces due east in expectation of the sunrise. This points to the hope of Christ’s return. A physical reminder of Peter’s of what Peter describes as “a light shining in a dark place, until the day dawns and the morning star rises in your hearts” (2 Peter 1:19).

The light shining through Jesus with the little Children.

I think the effect of this orientation to the sun and seasons is a pervading attitude of expectation. When your town is oriented around the seasons, your life is shaped by their ancient dance. There is a constant sense of connection with the rhythms of God’s green earth. You wait in hope for the rising of the sun to set you working; you wait in expectation for the sunset which brings rest. You wait in eager expectation of seasons, and their temperamental beauty as they wax and wane. And beneath it all, you have a sense of cosmic waiting…. for something, or someone to enter the glorious rhythm.

Implicit in the architecture I experienced in England is that nature means something. If it didn’t, why would they pay it any mind when building things? Sometimes it could seem it argues for nothing more than the influence of nature in the weather. But, deeper down, I think the orientation towards the rhythm of the sun and seasons reveals an implicit belief in a meaningful rhythm of life, one which made me think of life and death, hope and rebirth every time I walked to my lectures.

Most buildings here seem impervious to the sun doing anything other than shining generally somewhere in the sky. Buildings, at least where I am, stand in neat little lines, facing neither east nor west, obstinately immune to the change of light or season. It’s as if the buildings are built to look away from nature, and to say, “Nothing to see here! No meaning! Turn on your indoor light.”

The orientation of buildings here seems to be inward. We create our own light. We control our own temperature. Consequently, it seems the subtle indication is that meaning can only be found within our encapsulated worlds.

Oddly, I think the architecture effects me. When I first returned, I had a strange sense of greyness and loss of color. There was some vibrancy missing, and some rhythm that was not present. It even effected my praying. And,  I realized that I think at least part of it was the switch of scenery, and most of all, the switch of orientation towards nature.

At this point, you may think I’m crazy. Rambling on about buildings and sunshine and rhythms. But, truly, contemplating this has made me realize something deeper. It’s made me realize how profoundly effected we are by the way we face the world, and the way we orient ourselves. In Oxford, from the architecture to the malfunctioning heaters, I faced the world in expectation of light and dark, warmth and cold, and because of that, I saw meaning in it all. It wasn’t imposed, it was just there. And that sense of expectation extended into my spiritual life; as I anticipated the seasonal changes, and the light and dark of day and night, I intuitively had a sense of expectation for God. Beneath the flux and change, there was a sense of the reason for it all. Just as I intuitively was led to see meaning in the changing of the seasons, I was intuitively sensitive to God’s work, and his presence in all things.

Where I live in California, I have to purposefully reorient myself to maintain that view of the world. It seems that many things here are desacralized. With concrete and highrises, it seems its often easy to turn an eye away from any meaningful beauty in nature. And if you don’t expect nature to mean anything, it seems you lose an expectation that God will mean anything through it.

Our orientation to life, the way we face, determines what we see.

On my third day back, after diving into two condensed classes, I felt the need to feel sand in my toes. I peaked my head out the door of my room.

“Elena! Do you want to quit what we’re doing and go to the beach?”

Elena is an ever countable onable adventure partner. So jumped in the car and made our way to the beach. We parked, and scrambled down a sandy staircase to the shore. We breathed in the salty air and smiled at eachother; this was a good idea.

While we were there, the sun set. I won’t even try to put into words what it was like. It was glory. 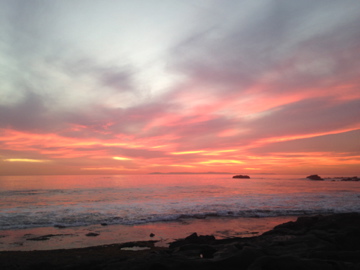 As we sat in silent awe, I was struck by something. Beside us, and crawling around on the outcropping of rocks were about a dozen other people, all come to see the same thing we had. To wait for the glory of the setting sun. On the hill behind me, there were hundreds of houses, their optimistic faces pointed due west. This place was expectant.

Even in the land of freeways and highrises, at the ocean, everyone stopped and stared and waited. Just as in Old Bath Abbey, we were baptized with the red light shooting across the water. 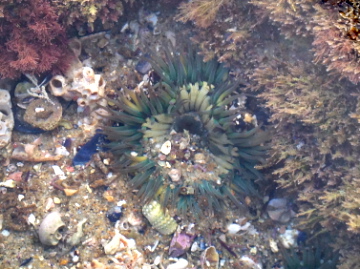 An anemone we found.

Today, as I finish writing this, I am on to a day of research for paper due tomorrow. I will be holed up in lovely little room. But even today, I want to live in expectation. I want to shape my life on the rhythm’s of prayer, seasons, and hopeful waiting. And, I want to see God’s fingers at work in every fallen snow and blooming flower; may I never let concrete disguise glory. I wish the same to you.

I wait for the Lord, my soul waits,
and in his word I hope;

Joy Clarkson is a featured columnist and the Director of Marketing at Humane Pursuits. She is a graduate of Biola University, and also spent time as a visiting student at Oxford University studying C.S. Lewis, Literature, and Theology. Her days are spent helping people and companies tell their stories well, pondering, writing, singing, and drinking too much Yorkshire Gold tea.

We think it is possible to live well-rounded lives filled with meaning...even in the context of the constraining boxes created by the modern world. The way forward? Humane pursuits.